The farm has 100 ha of UAA valued entirely by the herd of 68 dairy cows. The aim is to optimize pasture while improving the quality of life of both the farmer and his wife (no employee). They chose to install a milking robot in 2010 to no longer have the strain of milking.

The farm is bordered by two roads. Cows grazed on the other side of the road before the milking robot was installed. Since the robot, the accessible surface has been reduced to 9 ha, the cows having to access the plots without the farmer.

The couple wants to maximize pasture to reduce the cost of milk production and ensure food independence. The farm started a conversion to organic farming in 2016.

The partners first made a parcel exchange with a neighbor, to recover 4 ha. In 2016, they built a boviduc to access 11ha located on the other side of a road. The boviduc was 100% self-financing. It cost 17,000 euros.

An effective rotational grazing that facilitates the moves of animals

The plot is cut into paddocks to practice a rotating pasture. The 21 ha accessible are divided into 30 paddocks. The goal is to motivate cows to graze grass at a young and appetizing stage. This is as much important as the cows have to go to the pasture on their own with the milking robot. The rest period between two grazing periods for the same plot is 30 days.

A key point of grazing with a milking robot is to ensure a smooth flow of animals. There are 24 day paddocks and 6 night paddocks. Changing paddocks twice a day motivates cows to move between the robot and the plots. The cows spend 2 days per day paddock and 4 nights per night paddock. There are no troughs on the plots to encourage the cows to return to the building to drink. The paths are stabilized on 50 meters at the exit of the building.

On a daily basis, breeders avoid being too present. They push the cows to go out to pasture in the morning in transition period but never go to find them in the field.

The average number of milking is 2.2 milking/cow/day. The robot is used 70% of the time in the spring with 65 cows milked. The farmers do not want to saturate the robot in order to facilitate grazing management.

An intelligent sorting door is the exit of the building. It directs the cows either to the pasture or to the building if they have not been milked for a long time.

Organization of a day for dairy cows 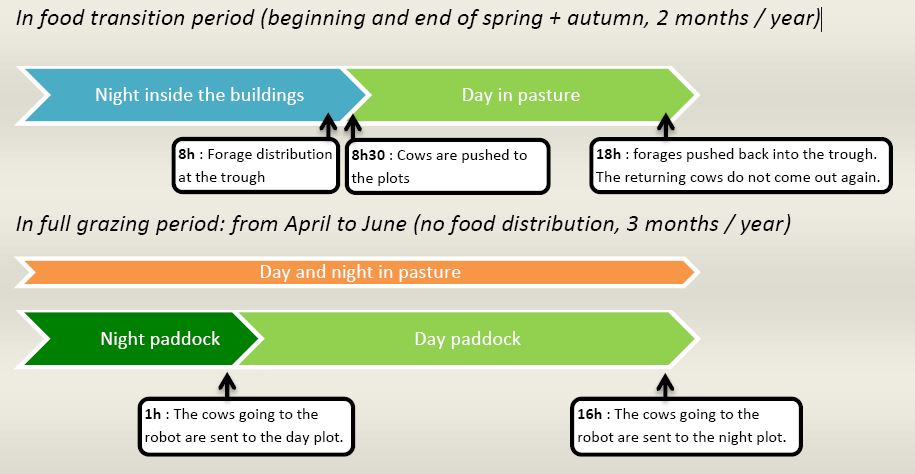 There are 40 ha of grassland on the farm including 30 ha of multi-species grassland mainly grazed. They are kept as long as possible, 10 to 15 years. Due to the organic label, there is no mineral fertilization. Pastured grasslands receive the equivalent of 30 μN/ha/year.

95% of the fodder is produced on the farm. The farmers avoid unnecessary stocks by focusing on grazing. Preserved fodder comes mainly from 12 ha of silage maize, 12 ha of hybrid rye-grass and red clover mix and 3 ha of alfalfa.

Concentrates are 90% self-produced. These are cereal-protein grain mixtures. The mixture is flattened on the farm and distributed to the milking robot (2 kg / VL / day on average). For 3 years, the farm buys 5 tons of soybean meal / year.

Pastured grass accounts for 38% of the dairy cow’s ration. 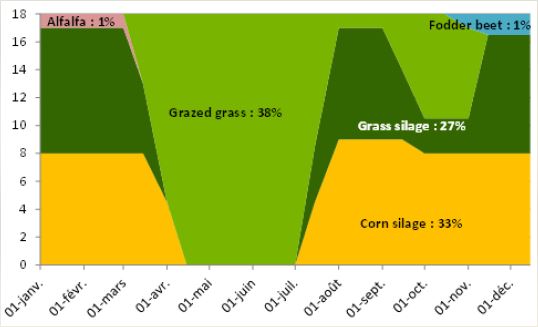 Cows produce 6,500 liters/year on average. The farm sells 430,000 liters of milk/year. This level of production is consistent with the autonomous grassland system.

A work organization that fits with family life

The farmers feel that there is little stress in their work. The spread calving period allows to distribute the work over the year and reduces the strain with the robot.

The strain work represents 5h/day for the couple (2h30 / day each). Over a year, the two partners accumulate 3,500 hours of work, which corresponds to an average of 35 hours / week each.

The replacement for vacations or weekends is facilitated by a simple feeding system.

According to Christophe MALINGE, the evolution must be progressive. He first learned to master the rotational grazing, then set up the robot, landscaped the plot, then went organic.

The accessibility of the paddocks seems very important to him: he advises to have at least 25 to 30 acres of accessible grass / cow.

One must be convinced of the interest of grazing and give oneself the means: to provide good access (paths) and to organize the circulation. The grazing needs to be expanded to make it profitable. The locations of the robot and the sorting gate in the building are important for fluid moves of animals. According to him, a sorting gate is useful from 55 cows / stall.

Finally, one has to accept reductions in production at certain times because one knows that it is economically interesting. Do not be afraid to take risks. It can be disconcerting to decrease production when equipped with a milking robot. At some times, with 100% grazing, their cows only produce 16 liters / day and yet it is a profitable strategy.

What could be further improved?

What could be the risks for other breeders to adopt this innovation?

How to communicate and disseminate innovation?