The GAEC de la Charmée has comprised Régis DURANT and his wife until May 2017. From that time, their son has joined the farm, they have lent about 50 ha of UAA more, all in permanent grassland, and double their livestock.

The farm lands are not all good enough for maize production. The possible maize area is limited to 35ha. However, simulations made during the installation of the son showed that the needs of dairy and lactating cows should be covered by 50 ha of maize, in the current feeding system. Thus the farmers have chosen to have a better use of grazing areas, with the setting of a 1-day-bypaddock grazing pattern, which replaces the old pattern with wire, so that the needs of the cows
could be covered with only 35ha of maize.

The 32 ha around the farm building are divided into paddocks of about 1.1 ha each. All the dairy cows are grazing, generally from the 1st April to the 1st November. Since the setup of this grazing system, every year, the climate was abnormal (drier, rainier…), so the results are to be analyzed carefully.

Several indicators have been measured from 2015: 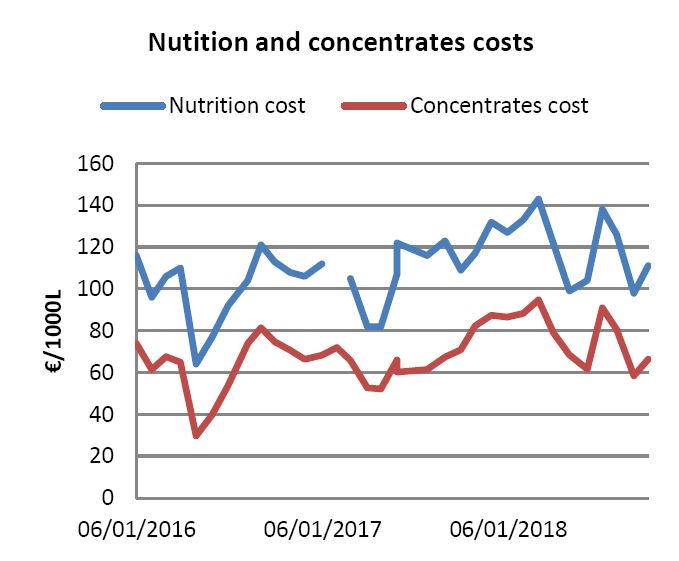 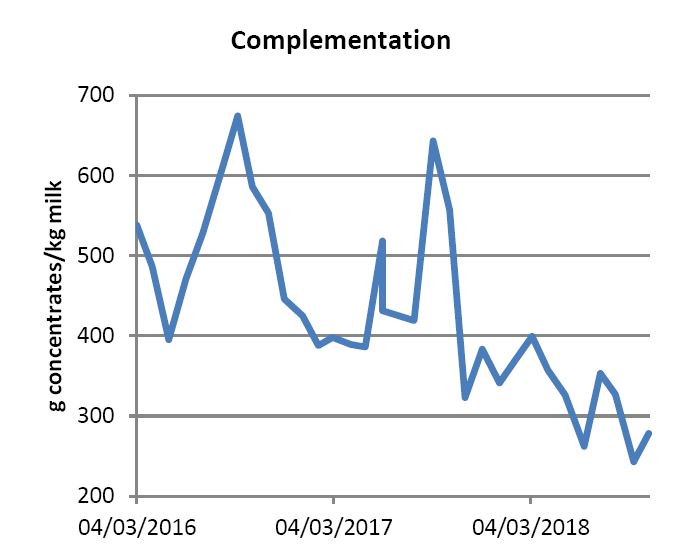 This new grazing management has allowed decreasing by 14% the quantity of concentrate to produce 1kg of milk between 2016-2017 and 2017-2018. But concentrate costs have increase because of variations of the global price of soybean and other feeding stuff. 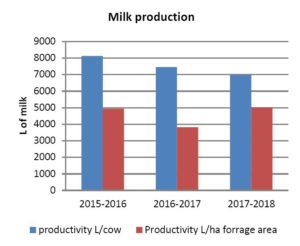 The grazing management evolution has allowed to maintain the productivity by ha. But the milk production by cow has decreased. Several causes can explain this: climate impacts, transition between two grazing systems, adding new cows to the herd and their adaptation etc.

There is no easy indicator to follow the evolution of work condition. M. Durant has the feeling that the new grazing system represents less work than the old one.

In a close future, the farmers will upgrade their system installing water supply for each paddock. That will allow less work time and better work condition. It will also allow increasing grazing performances. Indeed, for the moment, a cow must return into the building to drink, which is grazing time and energy loss. Pathways have to be reinforced to allow an easier cows’ mobility. In a more distant future, the farmers will grow trees and bushes at the right places in the plot to
bring shadow to the cows and increase animal welfare.

Climate change is a real challenge for this type of system. Indeed, prospective shows that average temperatures in June, July, August and September will have an important increase (to reach an average of 25°C in August at the end of the century). In parallel, rain will decrease during summer. Some questions stay in suspend about the possibility to graze earlier and later in the year (but what about soil support capacity?).

Climate is continental, with cold winter and warm summer. Rain is quite homogeneous during the year except during July and August when it is drier and there often are thunderstorms. As for other areas, climatic hazards are more and more frequent and impact grasslands productivity.