The soils of the farm are very dry in summer. The grass growth during summer never was important, but last years, it is absent. The farmer wants to reduce his maize and soy consumption to reduce the cost of production of his milk. To reach this goal, he needs to maximize grazing and so maximize the growth periods of his temporary grasslands. That why he chooses other species for his mixture: classic species as cocksfoot and fescue; and original species like sainfoin.

The choice of these species is guided by the drought and heat tolerance of the species. Indeed, the farmer notes that drought periods are more and more frequent and impact his forage management.

The reduction of concentrate in the herd feeding is financially helped by an agri-environmental measure (CAP). The measure also imposed a maximal rate of maize in the UAA.

The farmer replace his old mixture based on perenial ryegrass by a new one, based on cocksfoot and tall fescue. These two species are more tolerant to drought but more difficult in the use with grazing. Indeed, the leaf of dactyl and fescue are hardening quicly when the optimal stage is over and become uneatable by the cattle. The farmer had to have a better management of the pasture to avoid wasting grass and losing milk production.

The other innovation, for the same reason, is the introduction of sainfoin in the cultural rotation. Sainfoin is a species which is no more cultivated in this area since more than 30 years (and the introduction of maize as main forage ressource). Nevertheless, it is a plant very adapted to the local context and very tolerant to water stress.

At the beginning of the agri-environmental measure and of the implantation of new TG, in 2015, the reduction of maize silage led to a decrease of the milk production. Moreover, 2015 and 2016 were two bad years for forage cultures, grass and maize both. However, some first results can be investigated.

Multi species mixture for grazed TG are efficient and allowed to graze about 1 month more than a perennial ryegrass during summer. The TG stay green even in august and even if there is no growth. This mixture allows a re-growth in autumn quicker and more important than a single species TG.

The change of feeding for dairy cows, with less maize and more grazing grass had a different impact depending of the breed. Prim’Holstein were very impacted by this change with a big decrease of milk production ; much more than the crossbreed cows (Prim’Holstein x Brune des Alpes) which seems more adapted to a grazing system. This impact could seem anecdotic but was very important for the farmer, who was very attached to the genetic of his herd.

The sainfoin stays a plant well adapted to the area, in very superficial soil. The annual production is about 70% for the first cut. The forage of sainfoin is very sweet and eatable by cattle. It is also very fibrous and rich in protein. For the first experiment, it was destined to the calves, because of the presence of healthy molecule in the sainfoin (especially for the liver).

The main difficulties are:

We can estimate an annual production cost for sainfoin. All the costs are averaged on the two years of the culture.

The reduction of fertilization allowed by the sainfoin is balanced by the high cost of seeds. The low persistency of this culture increase all of the fixed costs (soil preparation and seeds for the main item). But the sainfoin also allows a higher productivity and a better quality of the forage.

The innovation do not allows a decrease of cost but a better use of low potential plots. The aim of the farmer is to replace the grasslands on superficial plots by an alternation between sainfoin and immature crops.

In the future, the farmer will try to produce the seed of sainfoin himself to reduce the cost of the culture.

To continue in the reduction of input and to have a better price for his milk, the farm is now labelled as organic farm. The farmer has so a new objective of productivity of 6500 to 7000L of milk/cow/year.

He already produces enough of protein on his farm to reach this objective but continue to produce maize, to have a slowly digestible starch in the feeding.

The next step on pasture valorization is to change the breed of his herd, to pass from prim’holstein to a 3 ways crossbreed.

The limits of the adaptation to climate change seem to be the tolerance to the heat of the plants, but also of the animals. The adaptation of the old cowshed and the plantation of trees and hedgerows between paddocks looks like ways to investigated for the resilience of the system. 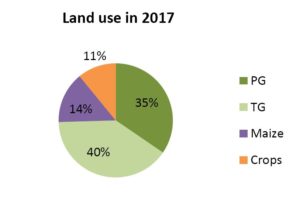 Climate is continental, with cold winter and warm summer. Rain is quite homogenous during the year except for July and August witch are more dry and with thunderstorm. As for other regions, climatic hazards are more and more frequent and impact grasslands productivity.
2016 was a very rainy years. This amount of rains has impacted the quality of forage: the mows had to be report of 3 weeks at least as usual.
2017 was marked by a cold spring and a reduction of grass growth compared as a « normal year ».
And to finish, the summer 2018 was warm and dry with a stop of grass growth since 1st of July.