Ekenäs Farm and manor is located south of Stockholm in Sweden. It is a 400 ha organic farm with 200 dairy cows that is the backbone of Oscar and Lilly Lamm´s Foundation, which supports science within nature conservation with special emphasis on soil, water, plant protection and landscape. The farm is commercially operated, delivering the profits to the Foundation. However, the manager often welcomes demonstration trials and other activities using the farm as a model. The farm is also frequently used for scientific meetings supported by the Foundation.

The dairy farm delivers organic milk certified by KRAV. The old barn housing 60 dairy cows was replaced in 2012 with a brand new loose housing system for the dairy cows and for 180 young stock. All feeds are produced on the farm and the animals are fed a total mixed ration (TMR).

In the period 2012–2014, Ekenäs Farm was one of 15 farms selected for a project aimed at studying the de facto losses in silage making occurring at farm level in Swedish silage production. Research at the Swedish University of Agricultural Sciences (SLU) to understand why dry matter (DM) losses occur, and hopefully find actions to reduce the losses, had found that Ekenäs Farm had less losses than other farms using bunker silos. The measurements were repeated to ensure that there were no errors in measuring and to analyse the management regime applied on Ekenäs Farm during ensiling.

Swedish farms are growing rapidly in size in order to achieve more effective production and to cut costs per kg milk produced. The size of the average dairy herd has increased from around 30 cows per farm in 2000 to around 90 cows per farm in 2018. Most Swedish dairy farms make silage in bunker silos. With the rapid increase in herd size, it has become common for farms to employ a contractor to harvest the forage. A self-propelled forage harvester in combination with three tractors with wagons is common and forms an effective harvest chain to deliver the crop to the front of the silo, which is filled in a short time. The current recommendation is for fast filling and closing of the silo, since ensiling is an anaerobic process.

The management system at Ekenäs Farm is the opposite. They use a towed wagon with a forage chopper mounted on. This means that when the wagon is full, no chopping can be carried out while the tractor is transporting the forage to the silo for unloading. This results in very slow filling of the silo. During the time when the tractor is going to the field to chop and fill the next load, another tractor is continuously packing the silo. With this extended time of packing, the grass is compacted hard as a floor before the next layer goes into the silo and the silage density is very high. When the silo is filled in the end of the day, the practice at Ekenäs Farm is not to cover the silo with plastic sheeting, which is the custom on most other farms, but instead to leave the silo open until the next morning. When work starts the next morning and the tractor and chopping wagon makes the first trip to the field for a load, the compaction tractor ‘after-packs’ the silage already present in the silo, for at least an hour. By that time the herbage in the silo has lost its turgor, has settled and is easily compacted further. Now the silo is finally ready for covering with plastic. The farm uses only one layer of common silo plastic, on top of which is spread a 10–15 cm layer of fine sand over the complete silo surface.

Ekenäs Farm is organic and uses no silage additive. Organic production also means very high silage consumption to provide all 200 cows and 180 young stock with feed. Despite the size of the farm, it has bunker silos with very moderate width (most around 6 m wide). This of course means that the farm has more silos, but the time it takes to empty each silo at un-loading is much shorter. This in turn means that the silo is open and exposed to oxygen shorter time at feed-out. The management system for feeding out the silage is also careful, using the so-called ‘step-ladder’ method to minimise losses. Any losses from the upper layer fall onto the lower step, instead of ending up on the floor and being spoiled.

This management system meant that Ekenäs Farm emerged with the lowest silage losses in the study run by SLU. On average, mean DM losses in the other bunker silos in the study were 14.1%, while the three silos at Ekenäs Farm had average DM losses of 4.7%. Many potential factors influ-encing the level of losses on the different farms were analysed (Spörndly, 2018). This revealed that one factor had significant, and quite surprising, effects. When all farms with bunker silos were ranked according to filling speed, i.e. kg DM loaded into the silo per hour, the results illustrated in Figure 1 were obtained. 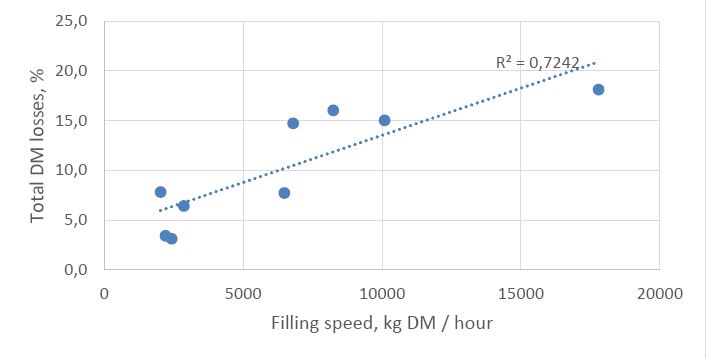 Figure 1. Dry matter (DM) losses as a function of filling speed in nine bunker silos. Hours are counted from start to end of filling, including night-time hours.

The three silos at Ekenäs Farm were among the four silos with the lowest DM losses (in the bottom left-hand corner of Figure 1). Another parameter identified as important for silage DM losses in the project at SLU was the air-tightness of the silo during storage. Small leaks that did not lead to inferior silage quality when measured at opening did affect the survival of aerobic microbes such as yeast, which was responsible for a fast temperature increase after opening the silo, resulting in large DM losses. Long unloading time, i.e. the time when the silage is exposed to air, gave higher total DM losses on other farms. However, all these parameters were at their lowest in the system on Ekenäs Farm, which had outstanding results. Despite low filling speed, with extended compaction, sand covering and low silo width, silage DM losses on Ekenäs Farm were 10 percentage units lower than on the average Swedish farm.

The ‘filling speed’ has become a new concept in silage management planning. Farms with very large and wide silos, and which employ entrepreneurs with high capacity for filling these silos, have found a way to adapt. Instead of filling and finishing one silo at a time, they fill two silos simultaneously. This requires two compaction tractors, but overall it takes the same time for the contractor to deliver the forage to the two silos. However, the filling speed of each silo is halved, enabling compaction to a much higher degree. It also results in more silage DM in each silo, due to higher density. Most important, though, is gives a more stable silage during feed-out, with less heating problems and lower losses.

The importance of covering the bunker silos with a heavy material such as sand was not fully investigated. This should be done and, if it turns out that covering with sand is a superior method, a technical, labour-saving method for spreading and removing the sand needs to be developed.