Description of the innovation

The establishment of improved permanent pastures is useful when it is profitable to shift from an intensive– or semi-intensive farming system based on annual crops to an extensive farming systems based on perennial or annual self-reseeding forage species. The advantage of permanent pastures is mainly due to the availability of fresh forage throughout the year, except during the dry season (from June to September in Mediterranean environments), when sheep graze on stubbles and high quality hay and concentrates integrate the animal diet.

Innovative legume-based mixtures based on local annual self-reseeding pasture legume and grasses (burr medic, subterranean clovers, annual ryegrass, etc.) and perennial species (red clover, cocksfoot, etc.) are of a great interest for extensive systems in Mediterranean environments. In fact, they show to be adapted to and productive under rainfed conditions, but they could also take advantage of some irrigation water to stimulate biomass production. Nonetheless, the success of these forage crops depends greatly from two critical aspects: a good establishment and a proper pasture management.

The sowing should be made in early autumn, before first rains in September. The availability of water in the seed bed will boost seed germination and a fast root growth.

The pasture should be preceded by a cereal crop, in order to guarantee the reduction of weed seed bank. A minimum tillage with discs or scarifier should be preferred to ploughing.

The recommended sowing rate for legume-based mixtures is 10-20 kg/ha, but if sowing is delayed due to adverse weather conditions, especially in marginal conditions and with not optimal seed beds, it is advisable to increase sowing rates to 25-30 kg.

The maximum sowing depth should be 1.0-2.0 cm. After the seeding, it is necessary to roll seeds.

The major objective of the management in the year of establishment is to ensure a large production of seeds (seed bank) of the sown species and varieties, in order to ensure a long persistence of the pasture and its excellent productivity.

(i) The grazing in autumn/winter should be done when the soil moisture is not too high and the bearing capacity of the soil is high enough to support the trampling of the grazing animals. Moreover, the young plants should have developed at least 5 – 7 leaves. Grazing should aim to keep the main sown species free from the competition of herbs and weeds. With this objective, the load of animals should be high, grazing should last for very short intervals and may be repeated once or twice after 30 to 40 days.

(ii) The pasture should be left in complete rest as soon as the first flowers appear. This event usually occurs at the end of February, so from this point the animals should be excluded from the pasture. The sown species shall grow and flourish freely, thus giving rise to an abundant production of seed.

(iii) The dry grass in summer must be removed. Animals can reenter the pasture when it is completely dry. The animal load should be high, so that before the arrival of the first rains in the following autumn, the dry grass have completely been consumed. Grazing animals will promote the release of the seeds and their burying, so as to facilitate the germination and development of new plants after the first rains.

In the second and subsequent years, plants should be protected from grazing after the 2 – 3 weeks following the first autumn rains, so that they can well establish without being destroyed at a stage where they are very vulnerable. From this moment forward, grazing can be carried out to adapting the animal load to the pasture carrying capacity. Again, it is important to let animal graze during summer so that, before the autumn rains, all the biomass is removed.

The proper choice of species and varieties relies on the soil characteristics, such as: 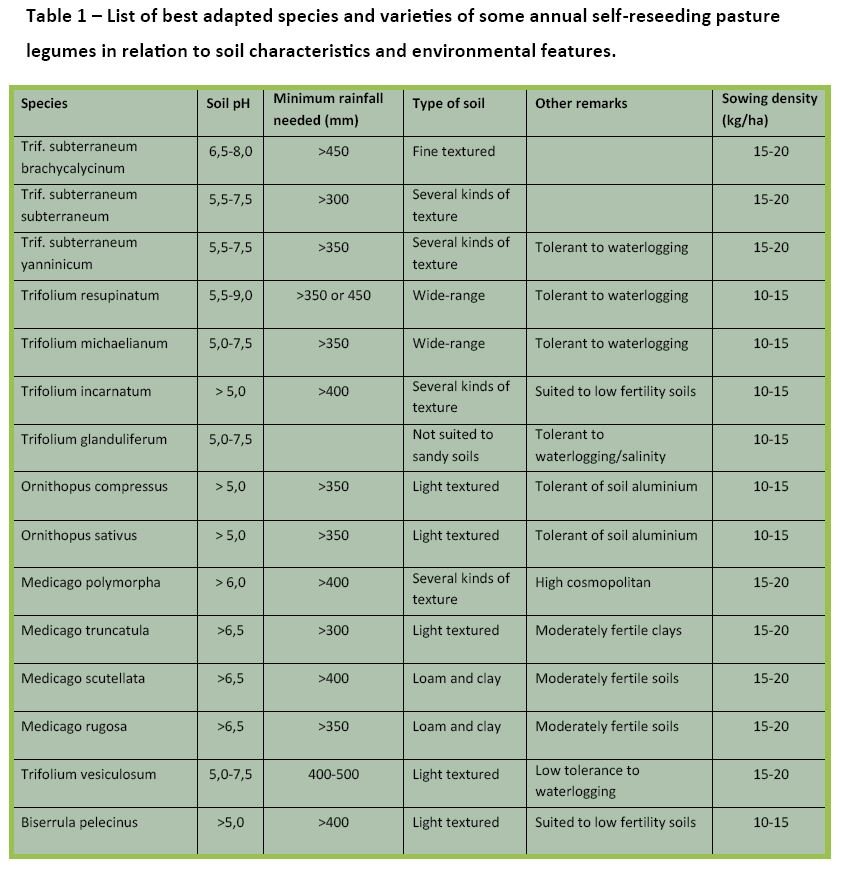 An example of farm with improved permanent pastures

The case of the Truvunittu farm (Sardinia, Italy)

The farmers seeded permanent pastures to reduce the use of agricultural inputs and the production cost of milk. Milk quality and cheese yield per liter was improved, too. The farmers obtained also a higher yearly forage production, thanks to the extended forage growing season and forage availability of permanent pastures (especially in early autumn and late spring), if compared to annual forage crops.

Why the innovation is working in the farm

The farmers have a long experience in pasture management due to their long family tradition in sheep breeding and pastures preserving (e.g. weed control).